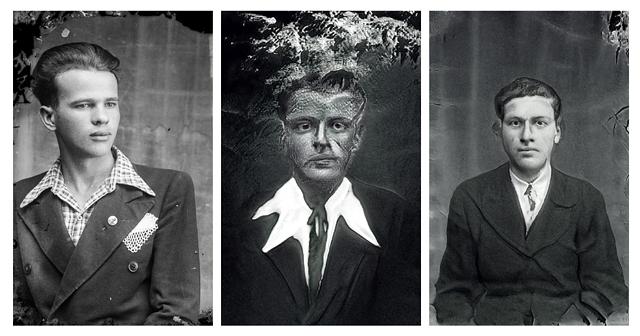 Many people thinking of an artist at work might imagine a painter poring over preliminary sketches or a sculptor shaping clay into the perfect pot.

But what, then, are we to make of artists like Eryk Salvaggio of Irondequoit, who spends hours turning digital information and computer datasets into collages of images, text, and sound?

Salvaggio is a multidisciplinary artist-researcher who explores how we use artificial intelligence (AI) and machine learning systems to communicate with technology. But in true artist fashion, his work is more concerned with asking questions than answering them.

“My work isn’t about coding, it’s about decoding,” Salvaggio says. “And so it’s about looking at what machines are sort of presenting to us, and trying to figure out how the machines came to those conclusions, or came up with those ideas.”

Salvaggio grew up in Massachusetts and New Hampshire, and attended the University of Maine to study new media and journalism. He went on to earn graduate degrees in media and communication as well as applied cybernetics from the London School of Economics and Australian National University, respectively, before settling in Rochester last year after his partner took a job teaching at The Harley School.

His web-based art has been featured in The New York Times, he has been a Wikipedia Visiting Scholar at Brown University, and he has collaborated with organizations including the Swiss National Science Foundation and the Wikimedia Foundation.

Though Salvaggio’s projects vary in focus, his recent work makes use of photographs that he filters through an artificial intelligence program to make new images.

Salvaggio has a healthy skepticism about the extent to which humans cede decision-making power to technology, such as allowing computers to make important decisions about someone’s credit history or ability to buy a house. The question fueling his work asks what gets lost when we put our faith solely in algorithms that value binary approaches — yes or no, if x then y, and so on — instead of people.

“It’s not analog versus digital for me,” Salvaggio says. “But when we are thinking about other products, and the way we build other stuff, it just tends to be that we see a digital solution. And we go all in on that digital solution. And we start cutting out points of analog interaction, meaning literally like conversation, like two people talking.”

Humans bring flexibility to problem solving and tactile processes that computers can’t understand. Consider a photographer making a print by hand in a darkroom.

Acsinte’s pictures had signs of wear due to improper storage in a warehouse. Salvaggio ran Acsinte’s images through a machine learning model known as a generative adversarial network (GAN), which was designed to create a new portrait of a hypothetical person using characteristics of people in the original photographs.

But Salvaggio found that the images produced by AI were only as good as the data that the computer was given to process. Because the quality of the portrait photos had already begun to deteriorate, the new images created by the GAN were even more warped, with the subjects’ faces smeared or obscured altogether.

A person, on the other hand, might have accounted for the imperfections and retouched the photos accordingly.

Salvaggio has also used his work to point out other shortcomings in technology, including racial bias.

As he undertook an effort to upload AI-generated images of faces to the free media repository Wikimedia Commons, Salvaggio used a group of thousands of portraits sourced from the photo sharing site Flickr and a prominent machine learning model, known as StyleGAN, designed to create new portraits from the existing ones.

But the AI was unable to accurately generate faces of Black people, particularly Black women.

He concluded that Black people were underrepresented in the collection of Flickr photos, a flaw which caused the model to produce distorted images of Black faces. As a result, Salvaggio had to artificially create many more images via the GAN to arrive at an accurate replica of Black skin tones and facial features then he did to generate artificial portraits of white faces.

Salvaggio’s research into the intersection between society and technology has also yielded conceptual art with absurdist tendencies.

That was the case with the 2021 project “Toward a Situationist Blockchain,” in which he collaborated with artist Serife Wong to imagine how modes of governing in the pre-digital age might be applied to today’s online communities.

They focused on the Situationist International, a French anarchist-art movement prominent from the late 1950s to the early 1970s whose practitioners believed that people were being robbed of their time and energy by spectacle and illusion.

Salvaggio and Wong decided to imagine what the Situationists would build if they were creating a blockchain-based app used to manage cryptocurrency — an idea Salvaggio admits is ridiculous.

The result was LutteCoin, derived from the French word for struggle. Theoretically, if you were to download the cryptocurrency wallet for LutteCoin, it would use up all of your device’s resources and “brick” your phone or computer, rendering it nothing more than an expensive paperweight.

All of the computing power would go toward mining LutteCoin, but the user would never be able to actually obtain it. The idea is that the user could go on with his life, unshackled to his device and the digital world. Although LutteCoin is not a real cryptocurrency, luttecoin.com is functional.

Salvaggio sees the “Situationist Blockchain” as a way to reconcile the extremes of the radically analog Situationists, for whom nothing should be coerced and everything is voluntary, with a blockchain paradigm that enforces a stringent use of computer code and rules.

At the heart of the project was a critique of what author Jenny Odell referred to as the “attention economy,” in which apps and other online technologies are designed to get us to use our phones regularly, so that an algorithm can track our activity and location. 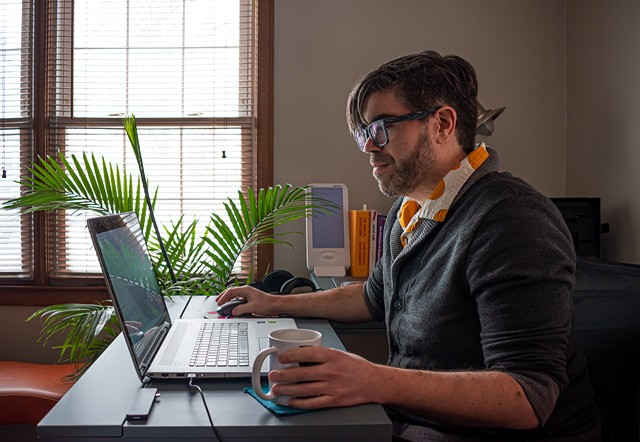 “Is our technology capturing the joys and the pleasures that we are getting out of those interactions and delivering them to us?” Salvaggio asks. “Or are they taking us away and trying to distract and sort of mediate those interactions?”

Salvaggio wants to arrive at a more natural connection between the analog and digital.

“I’m not saying, ‘Let’s all go raise sheep and end this digital tyranny,’” he explains. “I’m just saying, ‘Let’s think about ways to bring in a more organic and naturally human way of being, into these technologies.’”

Daniel J. Kushner is CITY’s arts editor. He can be reached at [email protected]